software architect, musician, and lover of the great outdoors in the beautiful Pacific NorthWest

For the last year or so, the development team at Learning.com has been working to move toward a microservices based architecture. This will allow us to scale up beyond what our current monolithic architecture can handle and allow us to deliver our award winning educational content to more students in more ways. In this blog post I will be talking about how we share data across microservices using an event-driven architecture and how we implement that using the Event Sourcing pattern and Redis.

One of the fundamental tenets of the microservices architectural pattern is the idea of “data sovereignty per microservice”. That is, each service owns and controls it’s own domain data and logic. They approximate a Bounded Context in the lexicon of Domain Driven Design (DDD). Each service has it’s own datastore and services do not reach directly into each other’s private data stores to update their own state or retrieve data for display. This allows services to stay highly decoupled, independently scalable, and independently deployable. The challenge with this is determining how services communicate across boundaries. In a naive design like the one below, services can communicate with each other through their public HTTP API, but this can lead to a host of possible problems.

Such a design can also introduce performance problems as the UI must wait for multiple HTTP calls to be made between all of the services to update their data. Finally, it leads to data consistency issues in making sure that all data stores get properly updated. In such a distributed system there is no way of guaranteeing that updates to all the services are performed atomically. According to the CAP theorem, no distributed system is safe from network failures and therefore, we must choose between application availability or data consistency when network failures occur. What that means for this example is that there may be a situation where one of the services is down, or the network connection between services is down, and therefore data cannot be updated. In this scenario, either the whole system will have to fail and give the user an error, or the data will be end up in an inconsistent state. One way to address these issues, and the solution that we embraced at Learning.com, is to use an event driven architecture instead of direct communication between services wherever possible. 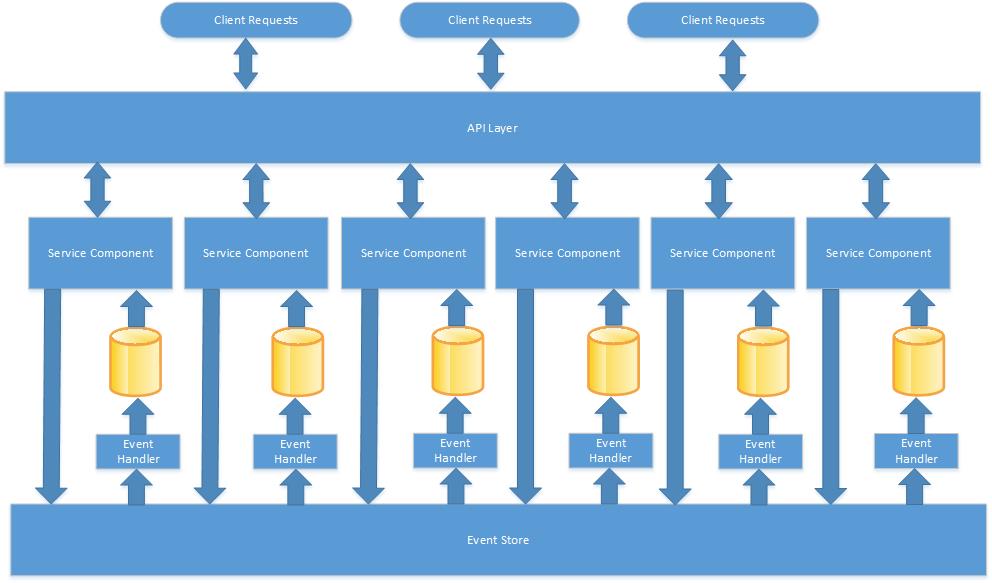 “Instead of storing just the current state of the data in a domain, use an append-only store to record the full series of actions taken on that data. The store acts as the system of record and can be used to materialize the domain objects. This can simplify tasks in complex domains, by avoiding the need to synchronize the data model and the business domain, while improving performance, scalability, and responsiveness. It can also provide consistency for transactional data, and maintain full audit trails and history that can enable compensating actions.”

Event sourcing makes use of an append-only “Event Store” that stores all of the events that have been performed on a domain object to get it to it’s current state. The Event Store is also responsible for publishing events that other services can subscribe to in order to create different materialized views for different purposes. Event Sourcing solves the problem of atomic operations and data consistency by providing the Event Store as the single source of record. Since it is only ever written to once for each event, updates are inherently atomic. This also allows for more responsive and performant applications because the UI does not need to wait for multiple data sources to be updated before continuing. All that has to happen is the write to the Event Store with all other event processing happening in the background while the UI continues. It allows for any number of subscribers to events to produce any number of materialized views without having any impact on the performance of the UI. It also allows for maximum agility because it is easy to consume events and replay past events to create other views of the data in the future that cannot be anticipated now.

Redis is the technology we chose for implementing the Event Store at Learning.com. Redis is uniquely positioned for this purpose at our company as it offers very fast write performance, we are already using it as an integral part of our infrastructure so there is little additional cost for setting up new infrastructure, and it has built in pub/sub capability that can be used to publish events when data is written to the event store. For most materialized views, SQL Server is used as the data store because it is much better suited for ad hoc queries and data aggregation, and our development teams are already very familiar with it.

One possible criticism of this structure is that it seems like we may be duplicating data in the event store and in SQL Server. This is not the case however. In general, materialized views stored in SQL will only contain a subset of the data contained in the event store and that data will generally reflect the current state of the domain object. It will also be stored and aggregated in different ways to make it suitable for a specific purpose such as reporting. The event store also stores the entire history of a domain object in an audit log. This means that data stored in the event store can be “replayed” and projected to any other materialized view in the future, which is not true of data stored in SQL server for use in a specific view. 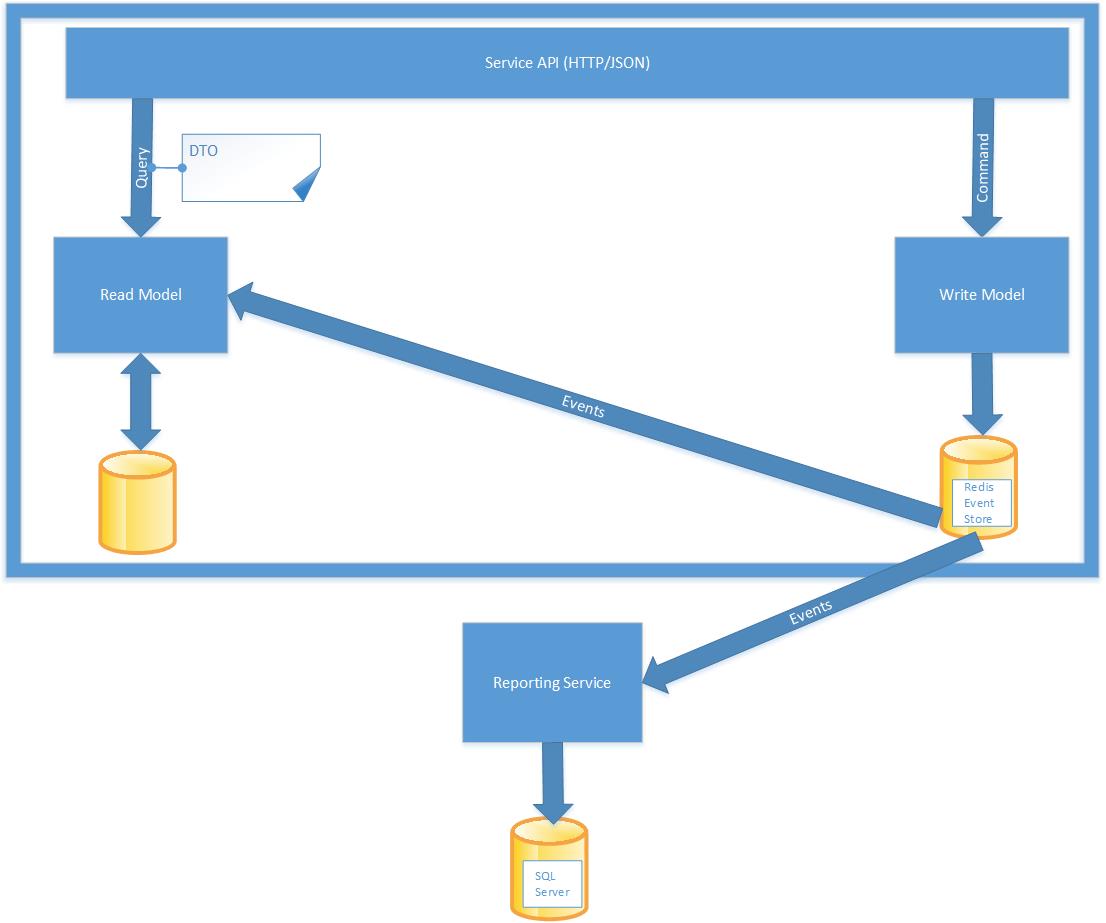 While Redis provides pub/sub capability, it is very basic. Event data is not stored internally by Redis so there is potential for data loss if subscribers are not listening for events. Therefore, steps must be taken to create a reliable queue to prevent data loss. The Redis documentation provides a pattern for creating such a reliable queue and this pattern is implemented in the Learning.EventStore library that we developed and use in all of our event driven services. The steps in publishing and consuming an event using the reliable queue are as follows: 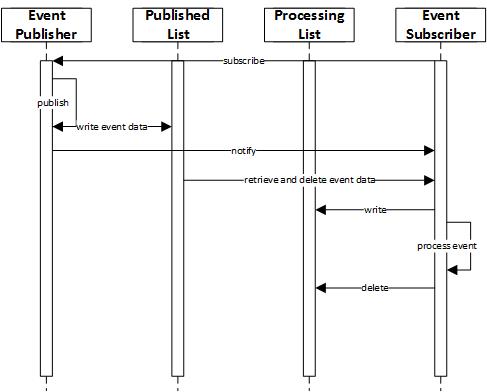 The fundamental primitive in the EventStore is a domain object or Aggregate. Going back to the example above this would be something like an Order. The state of the Aggregate object is stored as a series of events. For example, there may be something like OrderCreated, QuantityChanged, OrderDeleted, etc. 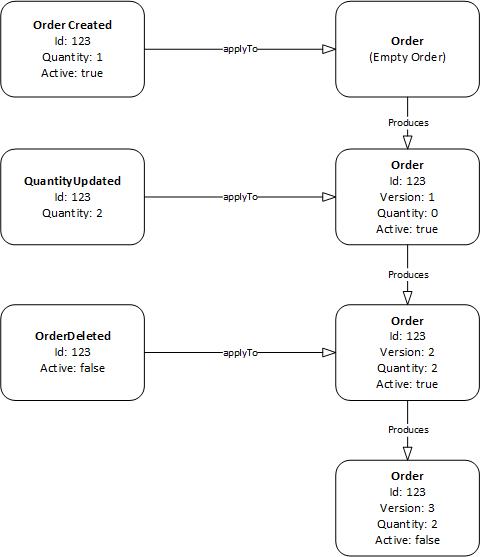 Within the event store, data is stored using a combination of data types offered by Redis:

For each Commit ID within the Commit List, there is a corresponding entry in a Redis Hash that uses the Commit ID as the key and stores the JSON event data as the value. Retrieving a single entry for a Hash is also a fast O(1) operation. In order to retrieve all events for an Aggregate, the entire Commit List can be retrieved using the Redis LRANGE. The list can then be itereated through and an HGET command issued to retrieve the data for each event. We use a CRC32 hash of the Commit ID and a modulo operation to partition the event data into multiple Redis Hashes.

There are a couple of reasons for this: 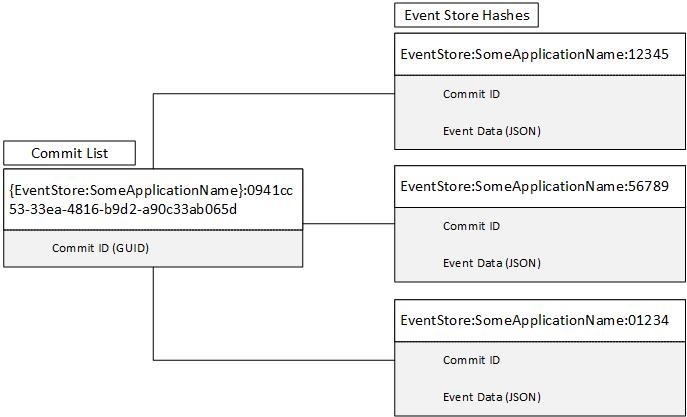 When building a microservices based system, one of the core problems that must be addressed is how to share data between services while maintaining availability and consistency. Using an event-driven architecture allows services to remain highly decoupled while allowing data to be used in new and novel ways in the future that cannot be anticipated now and without the need to make sweeping changes to the existing system. Event Sourcing is a pattern for implementing an event-driven system that offers atomic operations in a distributed system without the need for expensive and complicated distributed transactions. Redis is a great technology for implementing Event Sourcing because it is already in use in many organizations, offers outstanding performance, and has built in pub/sub functionality. Thanks for reading, and look for a future post where we’ll dive into building an event-driven service using our Learning.EventStore library.

You May Also Enjoy

Redisconf18 Talk Posted For All Time

My talk from Redisdconf18 has been posted for posterity to Youtube

A Year With Redis Event Sourcing

In the very first post on this blog in December 2017 I wrote about how we at Learning.com are using Redis to implement an event-driven microservices architec...

A couple weeks ago, I had the great opportunity to attend RedisConf18 in San Francisco where I gave a talk on using Redis as a message queue and as an event ...

One of the projects I’m currently working on requires using Angular Universal server side rendering for SEO optimization. While there are many great articles...